Guide of Istanbul The Grand Bazaar

The Grand Bazaar is one of the famous Istanbul landmarks. This very lively and colourful market is the oldest and largest in the world, encompassing nearly 60 streets with over 4,000 shops and in the back streets has a network of ancient hans where craftsmen can still be seen hard at work. 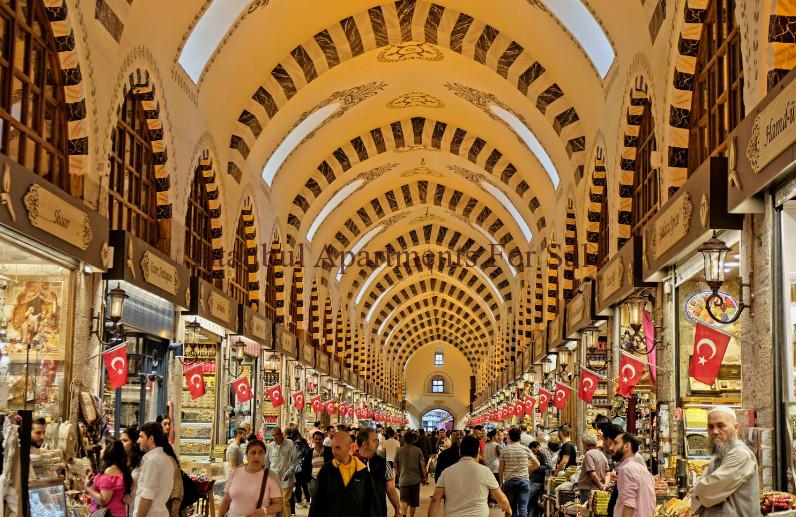 The Grand Bazaar (Kapalicarsi in Turkish) is probably the world’s first shopping centre or mall and dates back to 1461Originally there would have been different markets working side by side each selling their own specialised products. The hans and bedestens (places to store cloth) would have rooms usually on two levels that opened onto a central courtyard and visiting merchants could stay the night and store their wares. Some of these have survived but now have roofs and the different markets have been merged creating the huge complex that you see today. In the 19th century Dolaps (cupboard in Turkish) or wooden stalls once lined the alleyways and were used by visiting artisans.

The main entrance and start of the market is predominantly for tourists but if you venture into the quieter parts on the far side of the bazaar near the Mercan and Mahmutpaşa Gates you will find places like the delightful 18th century Iç Cebeci Han where they make rugs, and rather than entering the bazaar through the very busy Market Gate, take the more scenic route from Cemberlitas walking through the delightful grounds of the NuruOsmaniye Mosque and on to the NuruOsmaniye Gate that has a vibrant coat of arms painted above it. 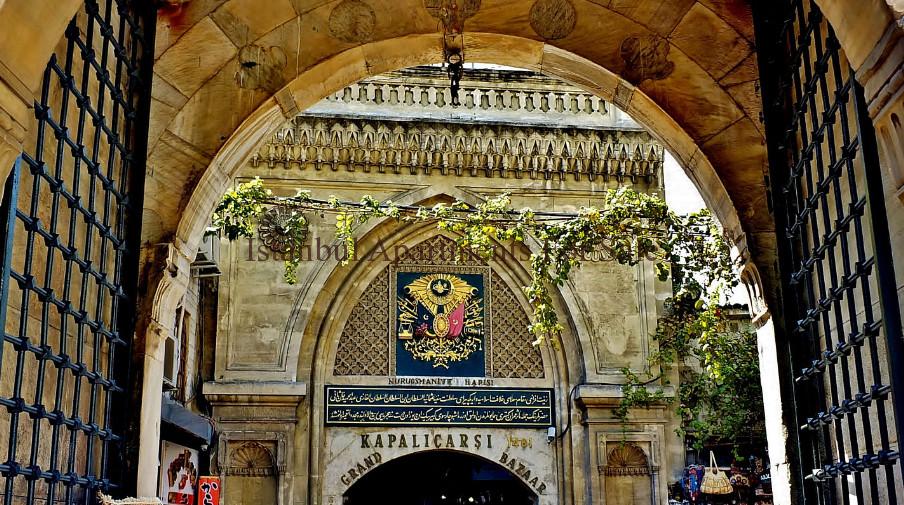 The bazaar sells what it thinks it visitors want to buy and in the past what has been offered to customers can be seen in the names of the streets such as; Kalpakçılar which once sold hats; Terziler had all the tailors; Yağlıkçılar was for the makers of oil lamps and Kürkcüler for the furriers.

For visitors who fear getting lost in this vast complex there are a couple of landmarks worth noting. The first is a lovely two-storey kiosk built in 1850 and was originally a pudding shop called Çukur Muhallebicisi and is now a jewellery shop and the second is the wooden minaret of the Cafer Ağa Mosque. Both of these should give you some bearings as to your whereabouts.

For refreshment and food head for the traffic free NuruOsmaniye Road with its many coffee shops, cafés and restaurants to suit all tastes.

Bartering and Bargaining at the Bazaar
Bartering or ‘pazarlık’ in Turkish is a way of life for the locals who would never pay the first suggested price. There are no rules for this practice and it really depends on what is being bought. Gold and precious jewellery is priced by weight and the price of which goes up and down daily but the workmanship is something you can bargain with. Like everywhere else in the world it pays to shop around before you buy but if you have tried bargaining and are not succeeding, leave the shop and if vendor follows you out it usually means he is still willing to drop the price; if he stays inside, it’s safe to say the price has been set and will not be lowered any further. We recommend that you try and bargain with the traders as you certainly have nothing to lose by doing so.
Major Sections of Grand Bazaar
The Inner Market (Iç Bedesten)
During the reign of Sultan Mehmed the Conqueror this was known as the Old or Cevahir Bedesten; it sits in the heart of the bazaar complex and was the original market dating back to 1461; at that time this was where male slaves were brought and sold. This is one of the most impressive parts of the bazaar full of expensive antique and jewellery shops that at night are protected by metal bound wood doors and is a great place to do some window shopping as you may find the prices here rather high.
The Sandal Bedesten
The second square inside the bazaar is known as the Sandal Bedesten and is close to NuruOsmaniye Gate. Dating back to the 16th century it was once used by the sellers of gold, precious jewellery and luxurious fabrics and the word ‘sandal’ is the name given to an expensive heavy cloth that was once made in Bursa . The wonderful architecture is easier to see here than in the choc-a-bloc Iç Bedesten and has nice brickwork within its 20 domes. Nowadays it sells pashmina’s, copy brand name leather goods and textiles.
Kalpakçılar Street (Caddesi)
This wide vaulted main street is between NuruOsmaniye and Beyazit Gates, known for its many jewellery shops and is always busy selling gold to locals to use as gifts at weddings and circumcisions parties. Here you are spoilt for choice with souvenir, antique, carpet, ceramic, textile and leather goods and it’s a good place to practice your bartering skills whilst drinking a glass of tea with the vendor.
Sahaflar (Secondhand Book) Market
This is a haven for book lovers and you will find the market in between the shops and the Beyazit Mosque if you leave the bazaar from the Beyazıt Gate.

Although today it mainly sells new text books for the students at the nearby Istanbul University, there are books for tourists and second hand novels on sale. You can also see on show at the back of the market some engraved stone plates that were used by the 19th century printing shops of the close by Bab-ı Ali that have been placed behind glass to help preserve them.

Article Name
Guide of Istanbul The Grand Bazaar
Description
The Grand Bazaar is one of the famous Istanbul landmarks. This very lively and colourful market is the oldest and largest in the world, encompassing nearly 60 streets with over 4,000 shops and in the back streets has a network of ancient hans where craftsmen can still be seen hard at work.
Author
Armaya Real Estate
Publisher Name
Istanbul Apartments For Sale
Publisher Logo